Sending invoices in 134 languages: from Abkhazian to Zulu

You can use two methods to create an invoice in another language. Translate it in a text document or use an invoicing tool that has built-in translations. The latter saves you time and prevents you from making mistakes. Which method do you prefer?

Why would you even send an invoice in a foreign language?

Sending an invoice in the language of your customer is a clear sign of customer centricity. International customers can certainly appreciate the effort you do when communicating in their language. Especially when it comes to money.

Besides the appreciation, there is another big win for you.

When you send an invoice in your customer’s language, you will avoid questions and delayed payments. When those happen, you can better use a proper email to remind your customer about the overdue payment.

This not only applies to corporate customers with strict procedures to approve and process invoices.

A small business, for instance, can hire an accountant who is not fluent in other languages.

In the end, this person needs to process your invoice. When it is composed in another language, that can cause a bottleneck in the administration.

Invoicing in the language of your customers can lead to faster payments.

Important note before sending invoices in another language

Before creating and sending an invoice in another language, investigate whether this will get you in trouble with

If this is not the case, go ahead. Create the invoice and send it.

In the other case, you can always consider creating a separate translation of the invoice.

But please be aware that every invoice has a unique ID.

Regardless of the format you use, there is always a sequential number involved:

If you were to copy these invoices in an invoicing program and then translate them, the numbers would go up.

For the tax administration, these are two different invoices.

Both are added to your revenue. And you will be taxed for both (VAT, taxes on profit, etc.).

You don’t want that to happen, do you?

Avoid sending your customers two invoices for the same order

What parts of an invoice do you need to translate?

An invoice is an official document. You cannot afford to translate it partially. Luckily, invoices have a limited set of elements that need to be included. Think of the word “invoice” itself, the “expiration date”, etc.

We have listed these elements in this article, along with an example of an English invoice.

All these words need to be translated. For example:

Luckily, translating this is a one time only task.

The harder part may be the descriptions of your services or products.

These need to be accurately translated because some countries charge extra, or no taxes for certain services or goods. If they get lost in translation, that can hurt your business.

Quotations are a good test of the quality of your translations. This is how it works:

Mistakes in translated invoices could cost you money further down the administrative road.

How to create an invoice in any language?

Depending on the software you use to create your invoices, the translation can be daunting or a breeze.

In CoManage, for instance, you only need to select one of the 5 built-in translations to switch default phrases into another language. 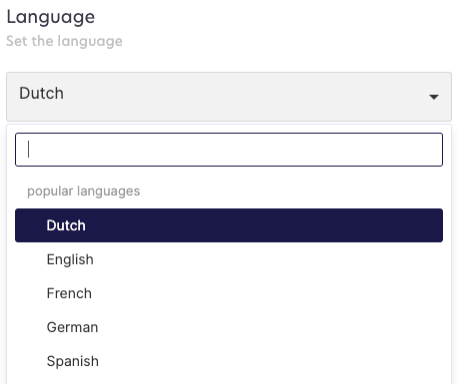 Besides these languages, you can choose from 129 others. Alphabetically, the list goes from Abkhazian to Zulu. Further down, you can see if your language is included too.

For the non-default languages, you only need to do a minor effort.

In the invoice configuration settings, you can select any of the languages. 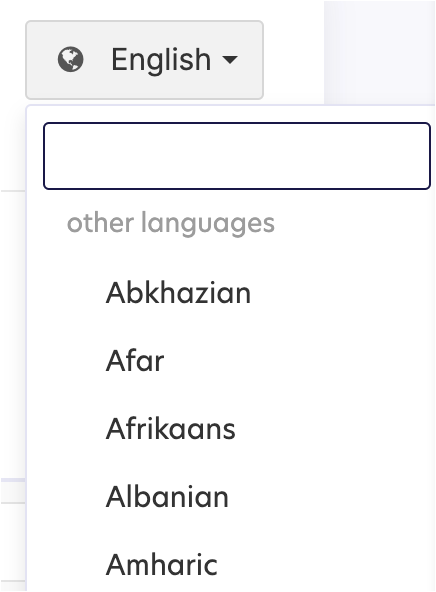 Then, you fill in the translation next to the original element.

Save your settings and you can create your invoice in the language of your choice.

Useful FAQ about invoicing in other languages

Can you change translations of invoices?

Before you submit your invoice to the tax administration, you can change your translated invoices. However, it is highly recommended that your customer receives exactly the same final invoice.

The reason for this is that countries exchange tax information. When it turns out that the invoice you sent doesn’t match the one you sent to your customer, you may get into trouble.

If you want to create an invoice in RTL (right to left), you can best use CoManage. The program is suitable for the following RTL languages:

If you invoice in a foreign language, do you need to use another currency too?

Invoicing customers in another currency than yours is also a sign of customer friendliness. In that respect, translating an invoice may often not be enough for businesses with serious international ambitions.

We have published a dedicated article about this, packed with tips and advice. But in brief: if one day you need to include a foreign currency on your invoice, your life would be so much easier if you use CoManage.

Sending an invoice in another language often implies that you need to use another script than the Latin alphabet. That can be a challenge when you send out your invoices to different countries. CoManage can solve this problem for you because it is ready for most languages.

This includes languages that use the following non-Latin alphabet:

The best way to check yourself how easy it is to create an invoice in the language of your choice? Click on the button below and give our tool a free ride.

Try CoManage for free
14 days without obligation to purchase 👍

Read more on our blog

Email is the ideal way to follow up on quotations. Instead of struggling with writing them, you can copy our 5 proven email templates. Adapt them to your needs, send them out, and watch your approval rate skyrocket.

You can use the examples in CoManage as your quotation follow up as well. The first 14 days are free! Take advantage of our 14-day trial period, the ideal way to discover if our tool adds value to your business. At your pace. Without obligation or credit card. But with the same support from our team.

After this free period you can continue to use CoManage starting from € 14,5/month.